We’re very excited to announce the next animated release from Dumper Entertainment.  November marked the premiere of The Film Bowl -- your typical movie review show except for one thing -- the critics are fish.  Check out the opinions of Gillbert C. Weed (Nathan Baker from Big Bother) and Finley Fitzwater (myself, Justin Marchert) as they scrutinize the cinema in “good cod, bad cod” fashion.  Hopefully, they’ll go easy on the actors in this month’s webseries category:  Acting Shows.  From celebs on their second careers to child protégés waiting for their start, Hollywood has them all. 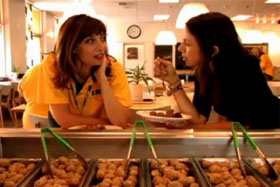 EASY TO ASSEMBLE
What does an actor do after she’s hit it big?  Go  to work at IKEA, of course.  Illeana Douglas (From The Temp Life) has accepted a celebrity spokesmodel position at the Swedish furniture megastore, only to find out that they expect her to sell furniture.  When frien-emy actor Justine Bateman (From Wake Up and Get Real) joins the staff as well, the battle begins for the coveted Employee of the Month award.  Michael Kang directs guest stars out of every Swedish aisle.  Besides playing herself, Douglas writes and produces the show, which won the 2010 Streamy Award for Best  Ensemble cast. 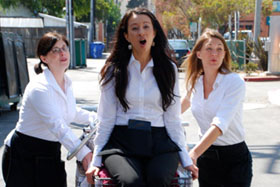 THE DAY PLAYER
Before stardom and Ikea, celebrities begin as day players.  At least they strive for day player roles while they wait tables.  Leena (Helenna Santos from The Ex-Convict’s Guide) is just such an actor.  Her career frustrations manifest themselves in fantasy sequences such as stabbing angry customer Miranda Allgood (Also co-executive producer) in the face with a fork.  But on the other end of her imaginaton’s spectrum, Leena can sing her troubles away, with the help of co-workers Jane (Jackie Clifford), Marci (Jill Klopp) and Chef Al (Patrick Gallagher from Glee).  Santos also executive produces, writes and directs The Day Player. 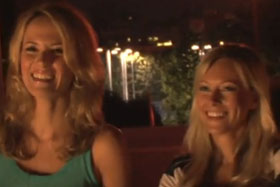 WORKSHOP
Our next selection expands on the trials of one actor and introduces us to a network of Hollywood hopefuls.  Writers/producers Nate Golon and Kimberly Legg play Jeff and Kaitlyn, a pair of actors struggling to launch their careers.  To do so, they enroll in acting workshops, which may lead to the right audition, which just may lead to stardom.  Also enrolled are actors Adam (Phillip Jeanmarie), Vivian (Leanne Wilson), Matthew (Jonathan Schwartz) and Sarah (Audra Marie).  Some actors have good fortune, others bad.  But the one thing they all learn is that no-one has it easy.  Look for WORKSHOP: Season 2 early next year. 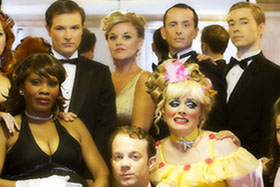 PRETTY
Some stars begin their careers before their 20’s.  As early as the age of 5, some children know they’re destined for greateness … or at least their parents do.  Annette Champagne (Stacy McQueen) is a contender in the Star Eyes beauty pageant. Annette’s advantage over the other 5-year-old girls is that she recently grew three feet (and two breasts).  Her father Michael (Sam Pancake) is the driving force behind Annette’s pageant ambitions, which leaves time for her mother Ribina (Dee Freeman) to carry on her affair with Michael’s brother Ethan (Troy Conrad).  Look for new episodes of Pretty: Season 2 every Monday.
Posted by Justin Marchert at 9:37 AM No comments: