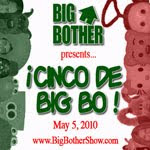 Big Bother: Season 2 is in full swing -- six housemates down, nine to go. May marked the half-way point for our webseries. Fifteen of the thirty episodes are now online for your viewing enjoyment. Also this month, the BB trailer was nominated for a Stay Tuned TV award (Winners will be revealed in June) and we released the BB Cinco de Mayo special. May also brings us Mother's Day. To honor the feminine holiday, this edition of the BBlog features four female-created webseries. Though they aren't necessarily mothers, these ladies have each created their own babies in WebTV. 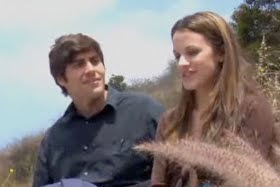 Life With Kat & McKay
We begin with creator Sandra J. Payne’s romantic comedy about a struggling actor who falls in love with a successful young woman. When McKay (Paul Haitkin) proposes to Kat (Jenna Finley), it looks like they'll live happily ever after ... until we meet their families. Kat's power broker Dad (Jim Garrity) is less than thrilled with McKay’s chances of success. The only person less happy with the relationship is McKay's Mom (Belinda Dunn), who sees no use for a woman who can't cook. Payne wrote, directed and produced KoldCast's Life With Kat & McKay and also directs and produces The Web Files. 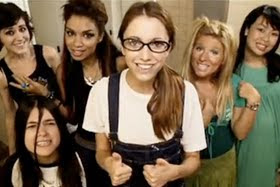 Creator Taryn Southern (from Sorority Forever) wrote our next selection, Private High Musical (Think High School Musical with sex, drugs and talent). Southern plays Sandra Smith, the awkward new girl joining the class of Mr. Johnson (Dennis Haskins from Saved By The Bell). Her classmates include WebTV regulars Craig Frank and Angie Cole (Both from The Crew and A Good Knight’s Quest) as well as several faces from Southern’s upcoming project, Taken: Among the Stars, including Lauren C. Mayhew, Mark Hapka, Jeff D’Agostino, Brett A. Newton and Katy Stoll (Look for BB’s Justin Marchert in Taken as well J). 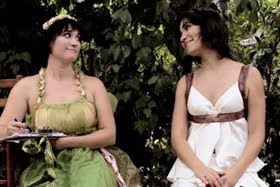 The 2010 Streamy Awards brought a night of surprises – some of them were even planned. You may recall the two beauties who opened the show by trying to kill each other. That was just a taste of the feminine fighting in Damsels & Dragons. Creators/producers April Wade and America Young, along with writer Eric Campbell, bring the RPG webseries to new heights with Live Action Role Playing. Every episode, the Game Master (Wade) leads the femme fatales into a fantasy adventure. The group includes a Cleric (Mirai Booth-Ong), Warrior (Kelly Lloyd), Wizard (Shaifali Ratti), Thief (May Zayan) and of course a Monster (Young). 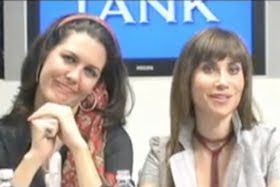 Ever participate in a market research study? Did that study require you to rub yourself down with a product that caused scratching, scarring, bruising and mild constipation? If so, you may be a victim of Groupthink (I mean a “productitioner” of Groupthink). This office comedy is created, written, directed, produced by and stars Angela Espinosa and Wendy Rosoff (both from Goodnight Burbank). Market research partners Cynthia (Espinosa) and Pilar (Rosoff) are less concerned with their work and more concerned with where to get highlights afterward. The duo reprise their roles for The Temp Life: Season 4 episode, Cynthia and Pilar.

Posted by Justin Marchert at 3:58 PM No comments: